Has Web3 Been Taken Over by Gamblers?

I'm concerned. And I know that several others in the web3 community are too.

Here's the issue: a certain part of the web3 population is in the space for one reason and one only: getting rich quickly. While this web3 persona, let's call him "the Gambler", may not openly express this as his main motivation, everybody who's been around a bit certainly knows the type.

After all, there are well-known memes too. 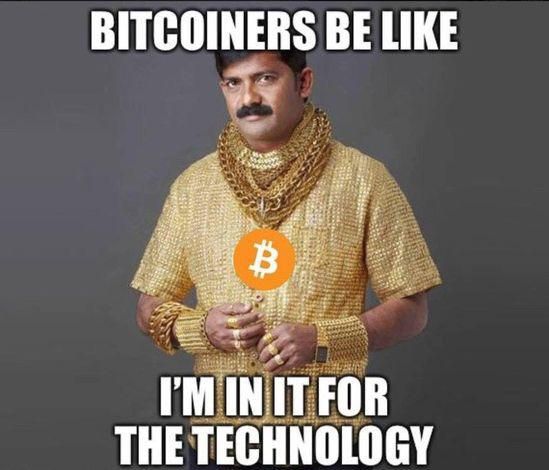 And while the claim from the Bitcoiner on the picture may still have been somewhat believable at the time - in the earlier days, crypto was still fairly technical and not really accessible to a non-tech-savvy audience - the advent of the NFT hype about 2 years ago definitely changed the dynamic. If you start looking at the web3 space nowadays, you can easily get the impression that you are staring at a digital playing field for degenerate gamblers who are flipping jpegs, hoping they might hit big.

Now, everybody who has been around for a while knows that there is so much more going on in the field. You might remember keenly the days when everybody was dreaming about decentralized alternatives to the big tech services, better governance of networks thanks to DAOs, or an inclusive, permissionless, digital-native financial system. But if you haven't been around that long - and we better face the reality that this applies to the majority of people - those are not necessarily the topics you think of when you hear web3.

On the contrary. I think it's fair to say that web3 has a bad rep in certain circles. Critically, including some communities that should be welcoming it with open arms such as gamers or streamers. After all, those well-versed inhabitants of the digital world should understand the benefits of ideas like digital ownership, a borderless internet economy, or more independence from big platforms. And while you'll certainly find some web3 supporters in those audiences, there's a significant amount of pushback and skepticism.

Let me tell you a little episode that gave me food for thought.

A fortnight or so ago, I met one of Germany's biggest streamers (who shall remain unnamed) at a conference. On stage, he said that he was "afraid of NFTs". Later, I asked him what exactly he was afraid of. His explanation was neither surprising nor could I take offense to it, not even as a web3 proponent: some prominent streamers, in Germany most notably , had promoted NFT projects that turned out to be scams. Their fans were quite unhappy. Understandably so. Hence, the unnamed streamer is now super wary whenever the word NFT pops up. Can you blame him?

Of course not. And that's the issue. Large parts of today's popular discourse about web3 is centered around stories such as the one I just told you. The Gambler (and worse, the Scammer types) have become who the broader public thinks of when web3/NFTs/crypto is mentioned somewhere. It's maybe not a crisis yet, but it's certainly an image problem.

I mentioned some of the grand visions that initially dominated the narrative. Those drew many people (including myself) to the space. Looking around today, none of them have come to fruition, at least not to the extent that we envisioned (and, hopefully, still do). The ambition that brought many people to the space was no less than to create a new and better internet for the people.

How far have we come in that respect? Well, most of the web3 landscape, from infrastructure level to services and (d)applications, is still pretty niche and the web at large is still dominated by GAFA and a few other big platforms.

Realistically, that's not surprising at all. At the time when the aforementioned visions were initially imagined and spread across the web (2.0), the technological groundwork for web3's arrival hadn't been laid yet. And frankly, we are still not there. Creating a traditional web service has become comparably simple because there is so much readily available tooling from open source code to APIs and established best practices.

Take the example of creating a user account and authentication system. That's pretty straightforward in web2.0. There are many best practices, standards like oAuth or OpenID, and various readily available solutions devs can simply plug in. Creating a user wallet, meanwhile, is just getting to a somewhat comparable state thanks to services such as , , or . And user accounts are only one of the many things your average web 2.0 service does that nobody really thinks about anymore. In web3, a lot of basic logic needed and still needs to be built from scratch. Once you realize this, it's apparent that manifesting the visions is no small undertaking.

Building takes time. So, the big successes expectedly do not yet exist (mind you, I'm not talking about success in the sense of headlines that contain very big dollar values earned with NFTs; I'm interested in mainstream user adoption). And yet, the fact that they are missing in plain view is exactly the reason why skeptics and critics have an increasingly easier time winning the "battle for the minds".

I hope (and believe) that Chris Dixon's tweet that popped up in my feed today (just in time to make this post), is correct:

I agree that this content may be displayed to me. Personal data will be transmitted to the operator of the portal for usage analysis. You can find more information and a revocation option under Privacy

But the image problem will not vanish on its own. And mainstream web3 adoption is not a natural law. Rather, it's upon another web3 persona to deliver: "The Builder" who works on creating real solutions for real problems. It's her deeds that are needed now. For one, "the Builder" needs to build, and build things that my wife, my dad, or my younger brother would like to use. And, importantly, she also needs to keep communicating. Not only does she have to explain what she's building but also why she's doing it.

Here's the thing: in order to manifest the grand vision, we need the people's buy-in. And getting them - especially the initial critical mass, the people who should be natural allies/community members, i.e. the gamers, the streamers, etc. - is a matter of mindshare. Sure, UX and convenience matter greatly as well. But there's also a cultural and emotional component that is key if you want to drive adoption or even create a movement. A few years ago, the community was really good at this. But it seems to me like we lost the mojo. And this better reverts soon. Or else web3 might one day really be remembered as a brief and really weird chapter in digital history: the time when a bunch of gamblers got rich buying and selling jpegs.

What's your take on this topic? Share your thoughts here in the comments or jump over to this ideation mission if you have an idea of how to work towards a better public perception.

You need to be logged in to boost this

Yay! You have seen it all